Fresh out of the ovens of Uncle Jiao’s in the village of Meijiawu, Nine Bends (of the River) Red Plum Jiuqu HongMei 九曲红梅 tea, a newly reinvented red (black) tea made from longjing (Dragon Well) leaves, reached our door in Guangdong Province via the miracles of friendship, innovation, phone apps and express delivery.

During the first weekend of April which was also China’s Qing Ming Festival (Tomb Sweeping Festival) we joined what appeared to be thousands of tea-obsessed tourists in their annual migration to the longjing fields in the village of Meijiawu outside of Hangzhou to grab the coveted spring flush longjing just as it hits the market and before the cut off date at the end of Qing Ming.

We were lucky in two ways: 1) It poured rain for much of the weekend which helped cut down on the number of tourists; 2) We had an inside contact in the form of longjing farmer and producer Uncle Jiao.
We were invited to visit the home, fields and factory of Uncle Jiao and his family because of their friendship with Lam’s best mate, a software engineer and entreprenuer named Wang.  Wang addicted us to tea and is brillantly enthusiastic about all aspects of tea.  Wang met Uncle Jiao and family because he started a Buddhism app project located in Meijiawu, a village known for both longjing tea and a strong concentration of Buddhists.  In addition to hosting a tea research center, Meijiawu has a monastery and temple on a hill which is also known for its longjing tea production.

The two also share a friendship and respect for Juan Jie, a tea service master, tea taster and teacher who sells tea with her husband and practices Buddhist meditation under the tutelage of one of the monks at the temple on the hill.  During our visits with Uncle Jiao and his family, Juan Jie came a couple of times to serve tea for us.  She also guided us on a walk up the hill to the temple where we lit incense for family members in honor of Qing Ming as well as walking through the temple’s tea fields.  Both Uncle Jiao and Juan Jie served us longjing tea from a gaiwan as if it were danchong, our first time to drink longjing this way.  Longjing is usually served in a tall glass so that you can see the individual leaves floating to the bottom.  Both Juan Jie and Uncle Jiao encourage us to drink longjing in the same way that we might danchong but warn us not to place the lid on the gaiwan because this will depress the smell. 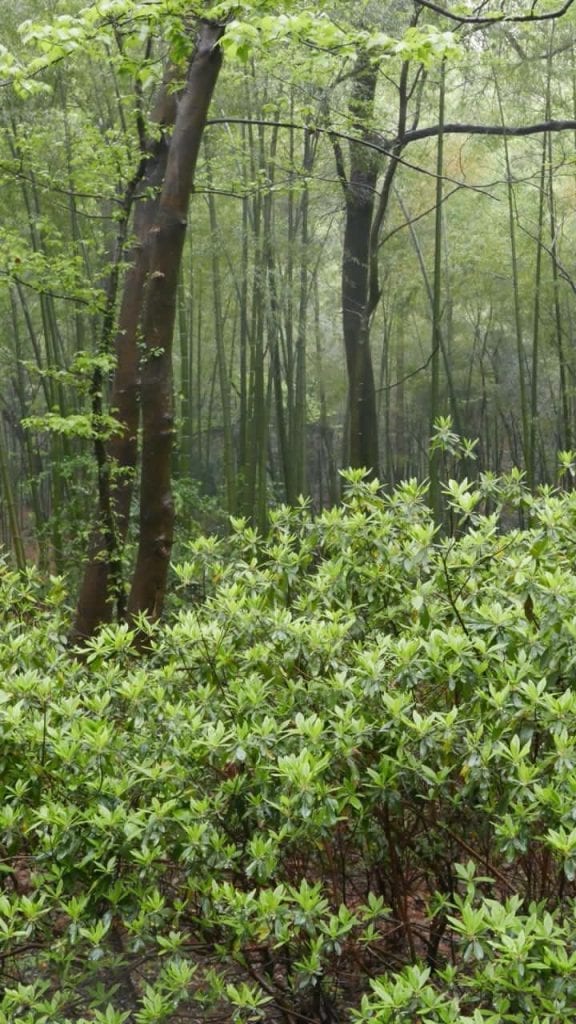 Wang and Juan Jie greatly admire Jiao’s traditional (orthodox) methods of tea production that largely depend on the skill of the tea workers and Uncle Jiao’s hands when he roasts the tea.  All three agree that this non-mechanical approach leads to an incredibly fragrant and tasty longjing which fills the nose with the scent of freshly plucked beans “douxiang”, the trademark scent of longjing green tea. Our friends and we are easily convinced; we take home enough green longjing for both our tea loving friends in the Balkans and ourselves.

Wang and Jiao are still working out how to cooperate so that Uncle Jiao’s insistence on older methods allows him to thrive and support his family despite producing less tea than that of some of his more technology inclined neighbors.  Wang is also trying to encourage Uncle Jiao to maintain his older Song Dynasty descended tea trees which do not produce the same abundance of leaf as the new “Longjing 43” clones, the latest in tea bioengineering. As Uncle Jiao explains during our hike into his tree fields, “Longjing 43” clones guarantee an earlier and more abundant spring harvest (the most profitable crop), consistency in leaf tone, shape and color, and is known for a strong perfume; younger trees also produce more overall.  The Song dynasty descended trees, however, lack this consistency and while they produce a unique and good tasting longjing tea, cannot provide either the large pre-Qing Ming flush or the overall production volume allows for consistent profits. Wang is trying to convince Uncle Jiao to refrain from tearing out the older trees and replacing them with the newer Longjing 43s.  Wang wants to repackage Uncle Jiao’s tea as a high-end, hand-produced, small volume, old-tree product by creating a tea app that will allow small and ethical producers like Uncle Jiao and his family to get to know his customers and allow both parties to buy and sell directly. Uncle Jiao, however, is still more concerned with a dependable income.
This new can of Nine Bends (in the River) Red Plum tea stems from one of Uncle Jiao’s ideas on extending the profitability of his tea bushes beyond the spring flush.  A reinvention of an old tradition of red/black tea from the area’s longjing leaves, this Nine Bends Red Plum tea creates a valuable (1200 rmb for one kilo), viable and unusual product from the post-Qing Ming leaves that grow too quickly and are too mature to have the ideal look and flavor as green longjing.  Uncle Jiao’s daughter is a policewoman, a new mom and the Jiao enterprise’s publicist, communications specialist (she runs the WeChat app) and long-distance selling manager.  Our friends and I make plans with her to let us know when this year’s first Nine Bends Red Plum is fresh from the ovens.  Within two days after the Jiao’s finish roasting the tea, Lam and I receive a kilo via express delivery. 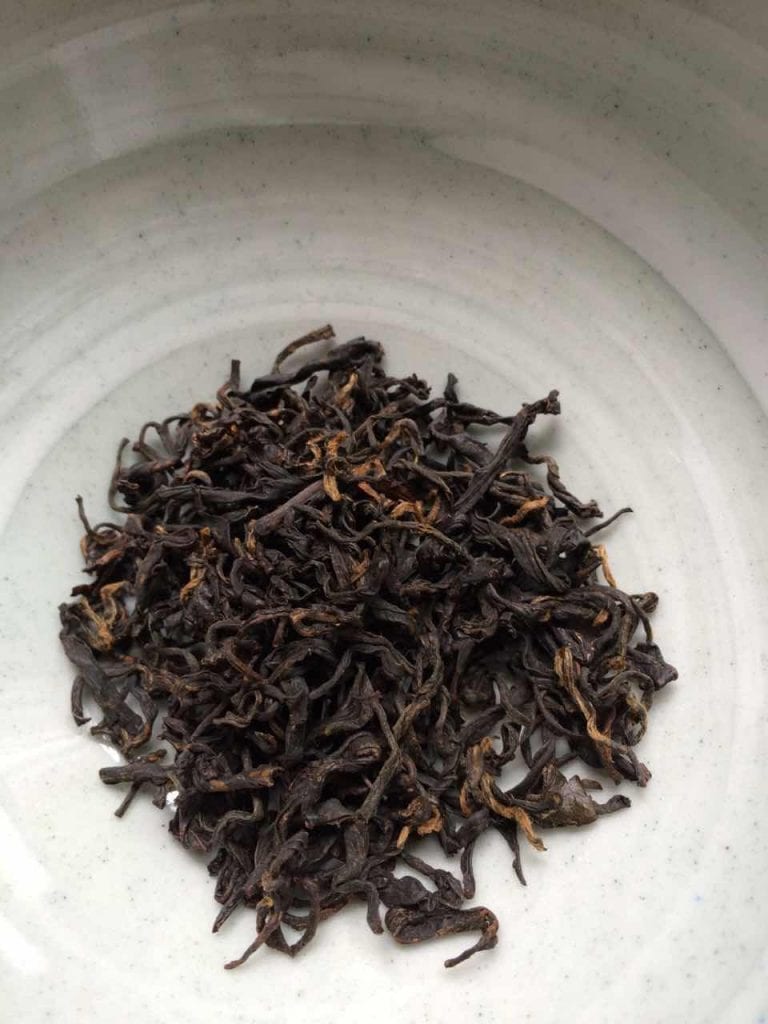 I crowd source opinions on this new tea from friends who agree to be lab rats and receive answers from the couple that visited Uncle Jiao’s enterprise with us and a group of Guangdong friends who usually drink danchong.  The consensus is that Nine Bends Red Plum is a successful experiment andd/or reinvention.  The tea has a consistent and distinct flavor and a pretty nice tail.  As a dry tea, it’s quite fine and clearly includes a high proportion of buds and its dry perfume is quite delicate.  That said, the taste is clearly that of a new tea:  the taste is relatively simple and there is a bit of astringency in the first couple of pours although this mellows out pretty quickly.  While enjoyable now, this new 2016 batch will probably improve quite a bit with a bit of storage time, even if only a few months – if the year-old Nine Bends Red Plum that we drank in Meijiawu can be considered a good model.

I look forward to sharing both Meijiawu teas, longjing and Nine Bends Red Plum, from Uncle Jiao’s enterprise with you – and I will let you know if they get that app running in both Chinese and English.
Hopefully there will be something to report from our visit to Suzhou.  If not, I’ll update you on our visit to the Wang family’s retail enterprise in the city of Shantou where we tasted two more of their teas.
Cheers,
Felix and Lam 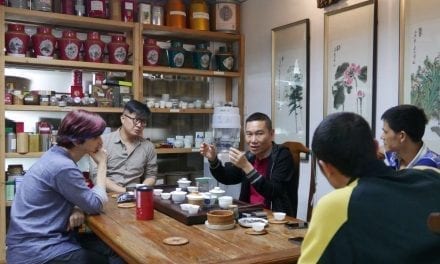 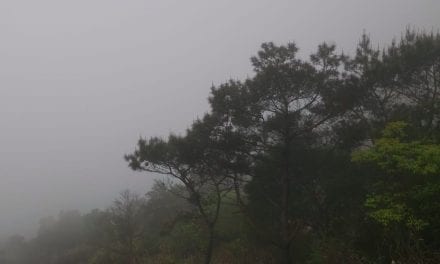